Considering the weather forecast, a big ‘thank you’ to all of you who attended this year’s Show and Shine. I think special thanks should go to the behind-the-scenes workers who gave a lot of time and effort to put this show on for the members. As the weather man promised the day started out dry and sunny… so before the other part of the forecaster’s promise was delivered our judges for the day, Stephen and Tim, started the judging. The judging took a good part of the day and was still in progress when the rain started, and did not stop. So two wet, cold, judges finally finished. Everyone else had enjoyed the BBQ and desert by that time; the judges had not had a bite! Next year we are going to need more people to judge, to help with parking, and a lot of other jobs. 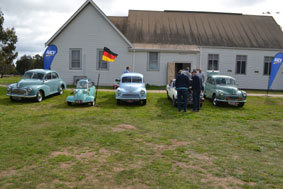 We had a good turnout of cars but given the club’s membership, there could have been a lot more. There were nine cars out of a membership of forty-five so very appreciative for the effort that those members put into the day. We had Morris Minor sedans, a Morris Oxford, a Morris Marshal, and a 1970 Morris Minor Traveller, a very rare car indeed. There was also  something you wouldn’t expect to find at a British car show… a very nice little Messerschmitt, two-seater, three wheeler with a powerful 198cc two stroke engine, 4 speed gear box, 4 forward gears, and 4 reverse gears, so top speed in either direction! The winners for the day were John and Annette Brooksmith for best two-door for the Messerschmitt, which also took out the award for ‘ladies choice’. Best four-door was won by Tony Cronin’s Morris Minor Traveller, which also won the ‘most popular’ award. No commercial vehicles were entered this year so no award was made for that category. 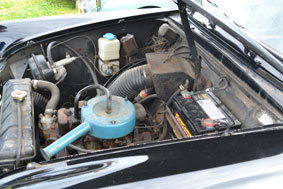 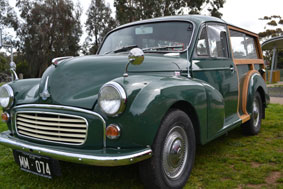 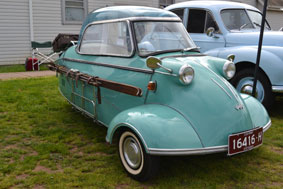 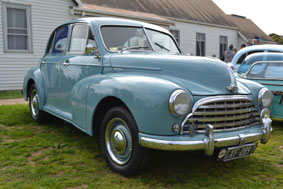 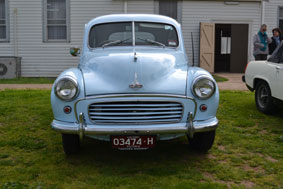 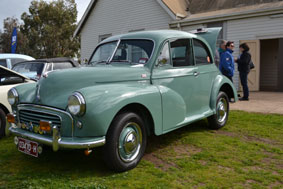 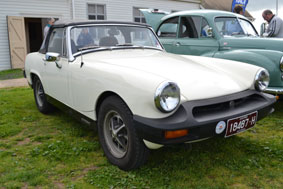 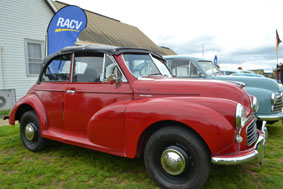 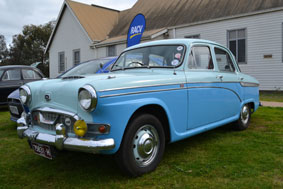 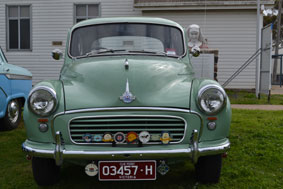 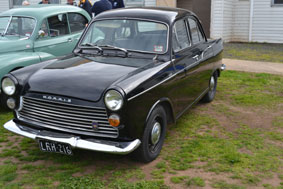 I suspect I know which car was young Oliver’s favourite car, he was all smiles after having a ride in the Messerschmitt. 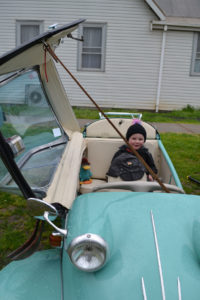 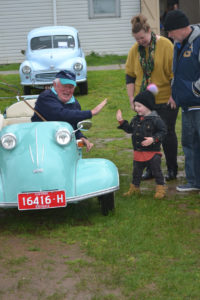 Thanks John, I think you made a little boy’s day, and I suspect a not so little boy by the name of Tim. It was very impressive how you and Tim fitted in that very small cab!  Thank you to all the members who supplied salads and desserts and did the washing up, also to my wife Marilyn for freezing out at the BBQ with me. In attendance were Rob and Anne Quinn (Morris Minor sedan), Elaine Booker (Morris Minor sedan), Shane Martin with Paulette, Kathleen, and Oliver (Morris Marshal), Rod Bowers (MG Midget), Bill Flaherty (Morris Minor Tourer), Tony and Marilyn Bullen (Morris Oxford),  John and Annette Brooksmith (Messerschmitt), Joyce and Joe Farsaci (Morris Minor sedan), Tony Cronin (Morris Minor Traveller), Stephen Whitworth (Morris Major Elite club car), and Tim Christie and Deb (modern) 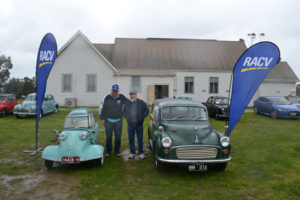 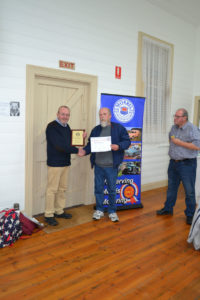 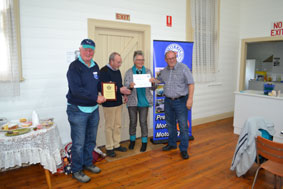 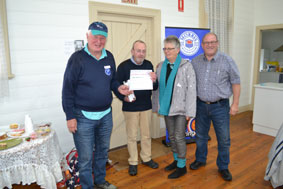 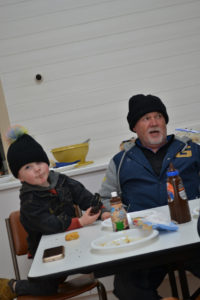